Just finishing up making my final preparations so I can head out early first thing tomorrow morning to go sit on a 400+ foot cliff that overlooks a creek bottom & shelf area that bucks generally use as a passageway to get to the back of a large AG field to the East, approximately 1/8 of mile away.

The wind shouldn't be a factor because we're supposed to have virtually no South wind in the first few hours of the morning, then it's supposed to change later on in the day, which by that time if I haven't killed a buck yet, I'll move on down to the wooded finger that goes out into the cut soybean field for at least the last couple of hours of the day, right where the deer have been feeding each night ever since I've been hunting that property over the past couple of weeks. They funnel straight out of the thick pine patch just yards away and into the cut soybean field shortly after they wake up.

Daylight is getting longer and so, I hope to catch a good buck off guard within that field if I don't nail one in the morning.

That last deer that I killed with my muzzleloader really boosted my confidence level towards that kind of hunting implement.

I have to believe that all the upgrades that I did to my muzzleloader over the past spring made all the difference for me and now I'm looking forward to try to take down a good buck with it.

I hope I can pull it off! 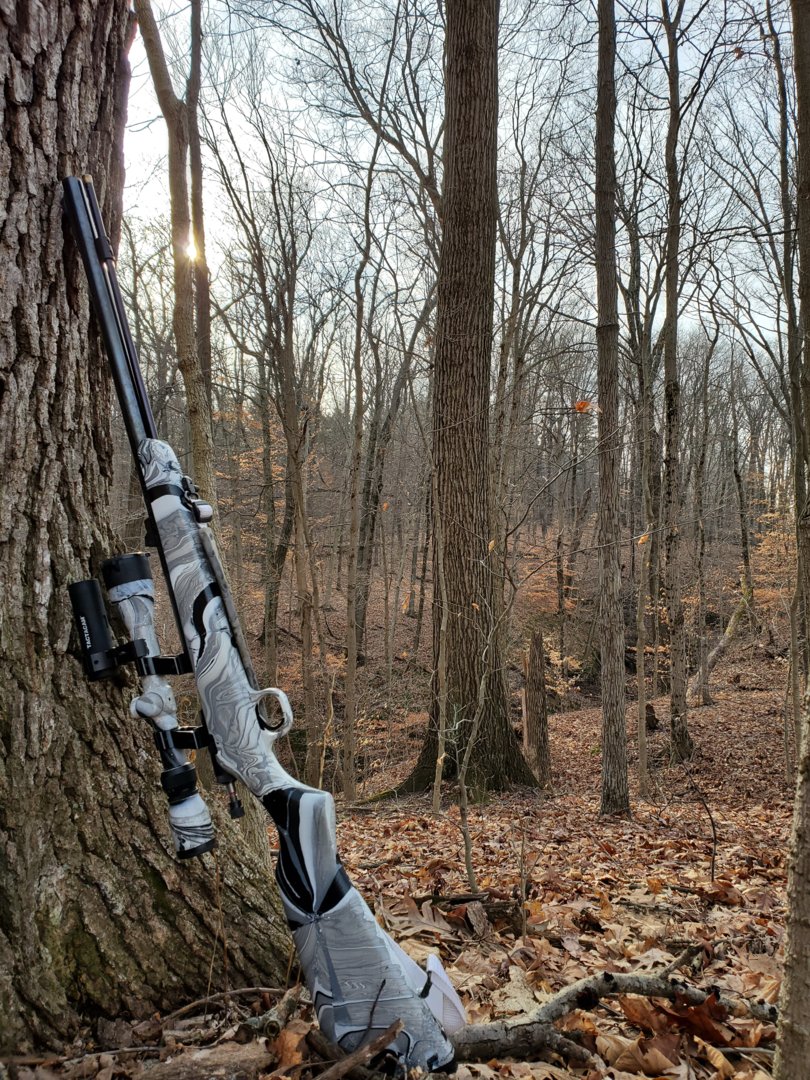 I left the house early and arrived at the property that I've been hunting over the past couple of weeks with plenty of time to get settled in well before starting time.

About 2/3rds of the way down a massive ridge, I sat up against a gigantic Oak tree that provided plenty of cover for me so I could easily overlook the creek bottom & shelf area, providing me shots within 100 yards. 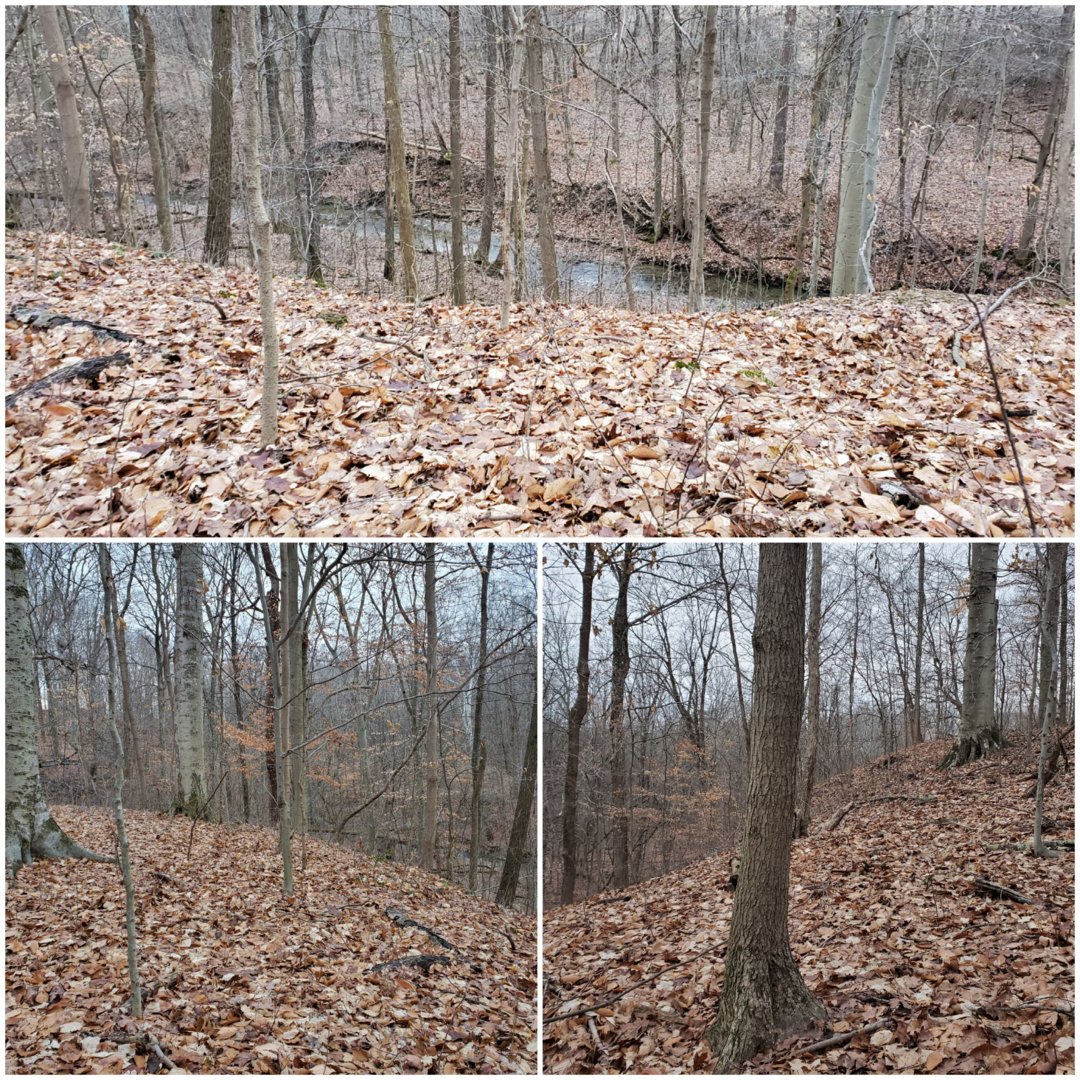 Right at 7:55 a.m., a group of four antlerless deer came from the West right along the creek on my side and cruised on by heading East in a matter of minutes.

After not seeing anymore deer for the next two hours, I decided to move to the other side of the ridge, facing East overlooking another huge ravine and the hillside that leads up to the patch of mature pines. 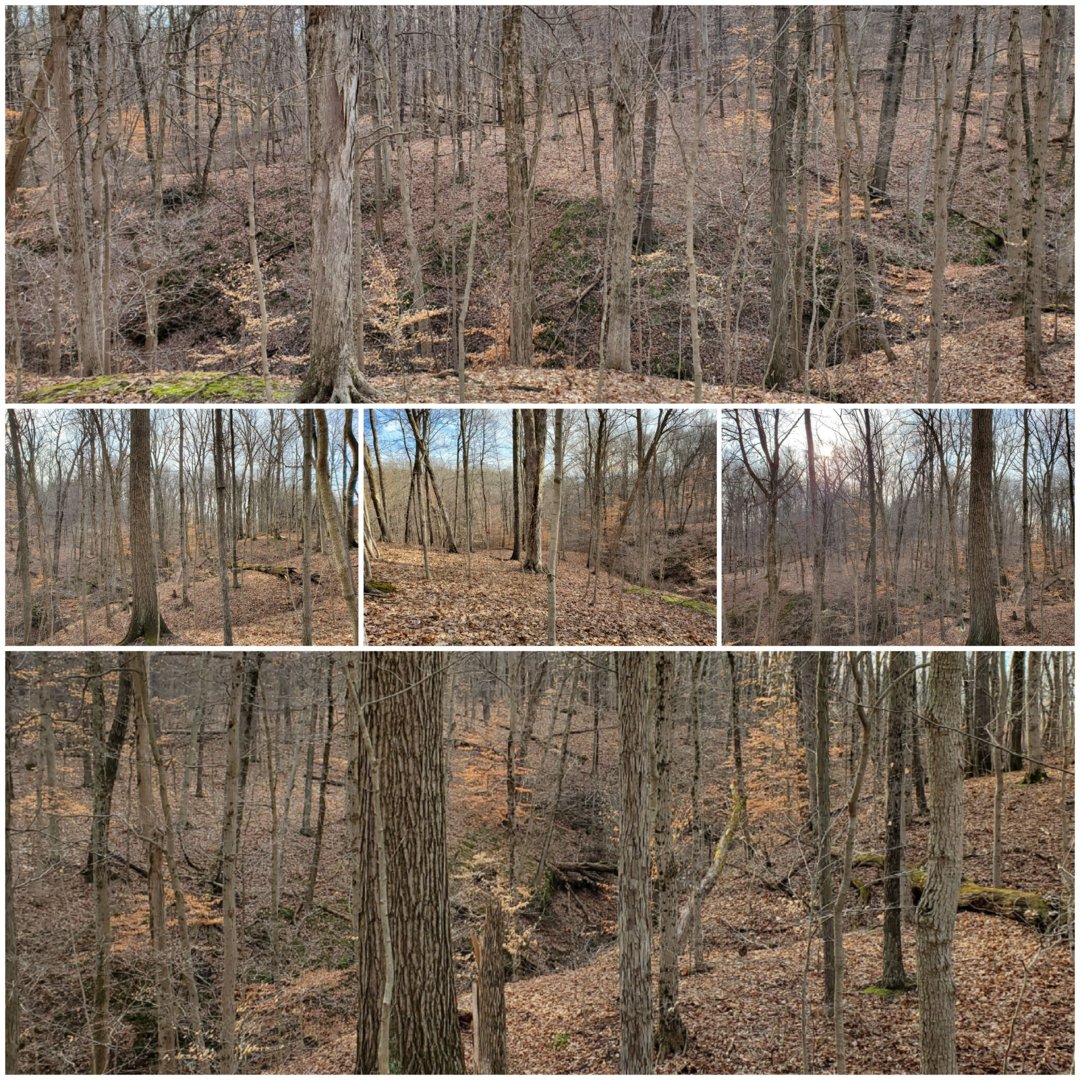 I sat up against another gigantic Oak tree for at least an hour without seeing any more deer and then I broke for lunch for a couple of hours.

When I returned, I headed back to the same original location that I hunted first thing this morning and sat up against the same tree from about 1:30 until 4:00 p.m. 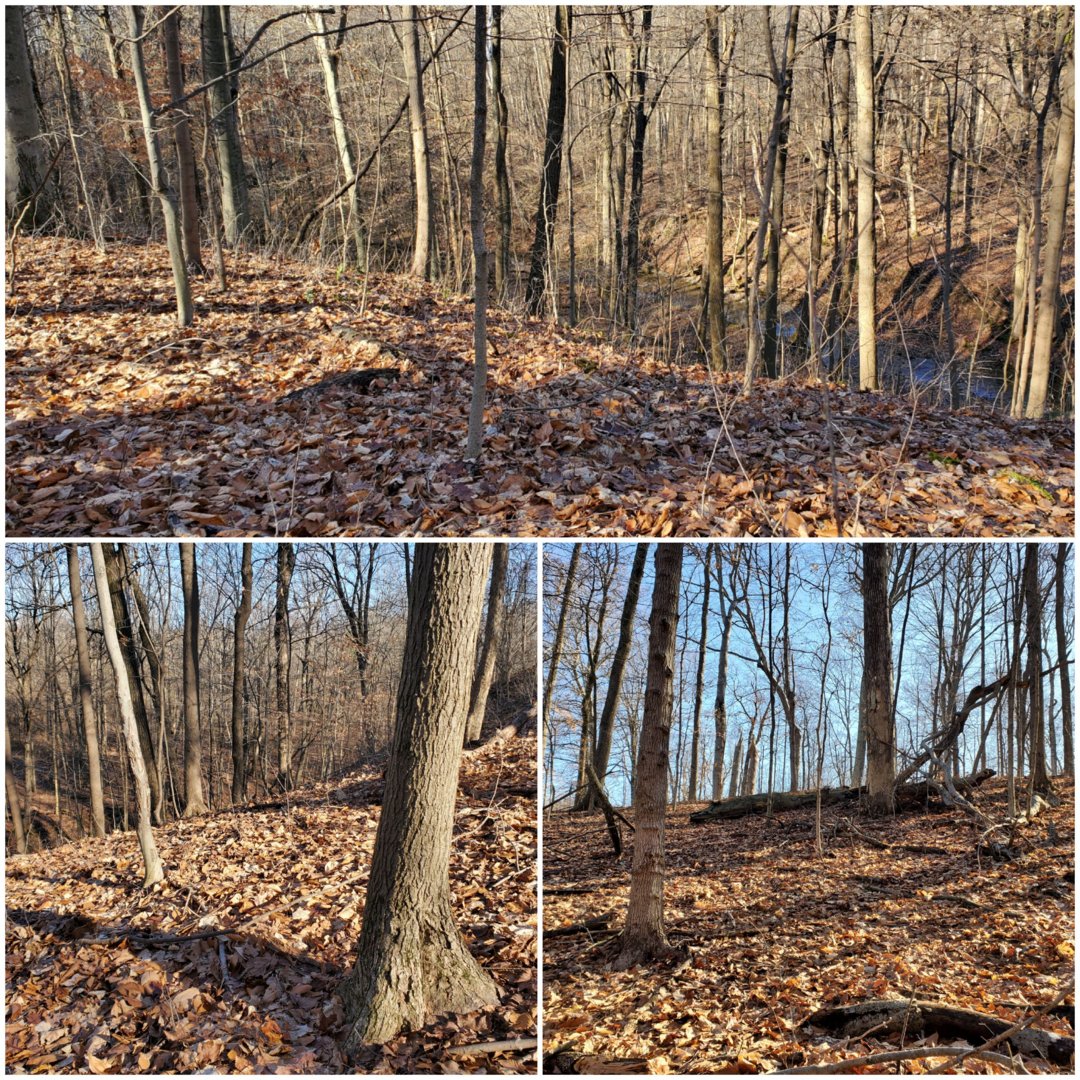 I didn't see nor hear any deer in that area during that time, so I decided to move on down to the wooded finger that leads out into the cut soybean field and finish out the rest of my '2020 Muzzy Season' there.

As I was working my way through the wooded finger, I encountered for the second time since I've been hunting this property an Albino Squirrel. 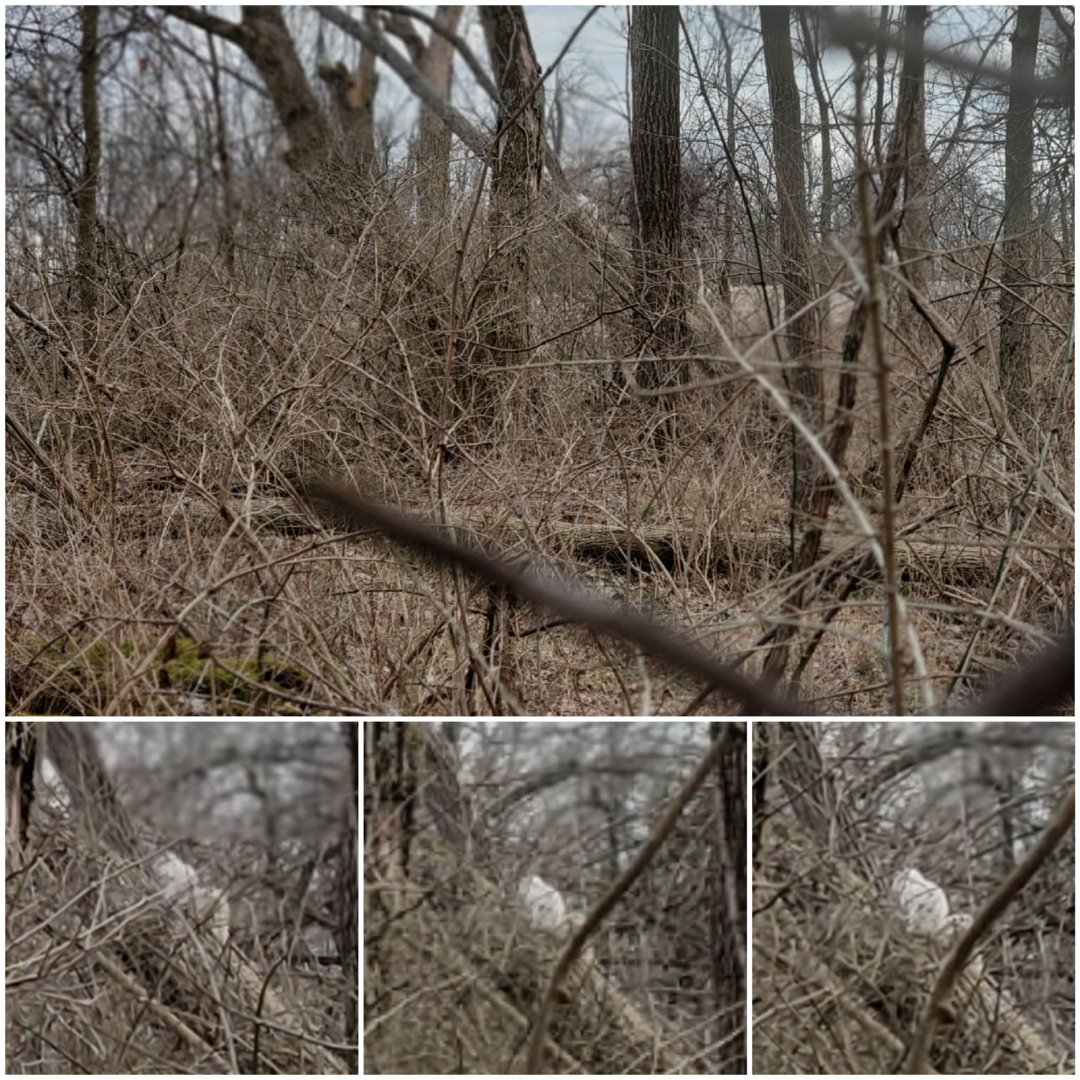 Yes, this was my second encounter with this little guy and in each case, I could've easily have shot him, but I didn't because in each case I encountered him during prime -time and I didn't want to spoil my area by firing off my weapon. So, he got the 'Free Pass' once again.

I ended up settling in right behind a small Cedar Tree that offered up not only good cover, but a couple of good gun rests 'TOO', facing out into the cup area of the field. The mature pines were due East from me. 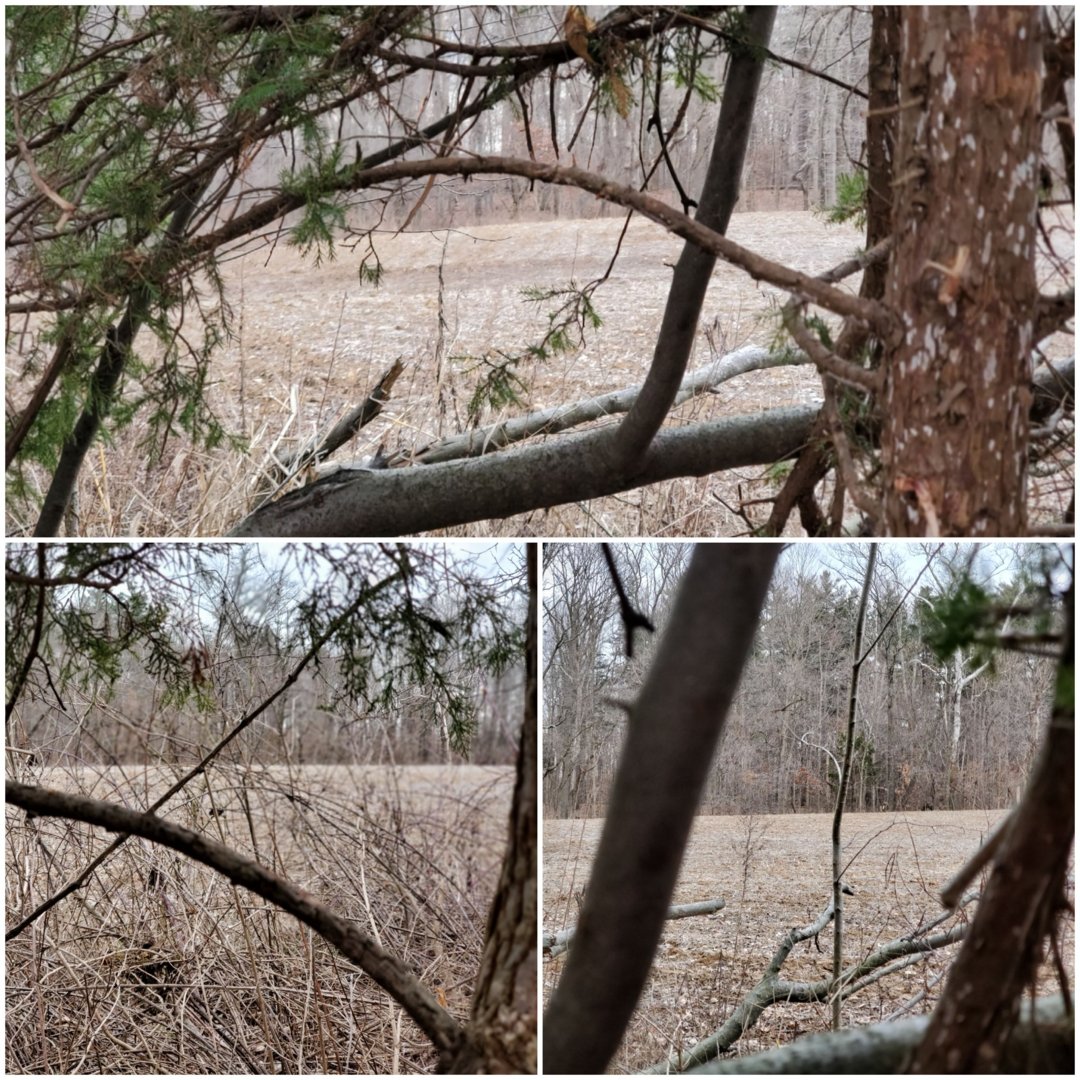 Unfortunately, not a single deer ever showed up this evening, which is astonishing to say the very least.

I'm blaming the warmer weather and the moon!

So, for the last day of Muzzy, I saw four antlerless deer, three adults and a yearling, all within bow range and, my fourth encounter in total with an Albino Squirrel while afield throughout my entire hunting career.

I arrowed the second one I encountered about ten years ago while dragging a deer out of the woods.

Hear that, Dave? Denny shot one with an arrow....

OhioWhiteTails said:
Hear that, Dave? Denny shot one with an arrow....
Click to expand...
Hey, I shot it! Blew him right off the tree. Follow up is what I need work on.
Likes: "J" and OhioWhiteTails

I’d say that deer was in range!
Likes: Wildlife

Just got back from the carryout to grab some coffee and this just happened right across the road from my driveway.

Pardon the music, I thought I was taking pictures rather than video. You might want to mute it & pause it because the both are just a couple of seconds long.

Approximately 8-10 antlerless deer on the move heading to the creek bottom.

I'll be hunting later this afternoon.

I was able to capture a screen shot from one of the previous video clips.

Like I said, the deer seem to be on the move today and within this photograph, there are at least eight deer within the field and I believe there might have been a couple more that already made it into the wooded area heading towards the creek bottom.

I believe it's that time of the year where the deer herd will be grouping together as one big bunch now that all the gun shooting is over with.

I'll try to get out later today looking for one with antlers.
Last edited: Jan 9, 2020
Likes: Sgt Fury and brock ratcliff

Click to expand...
I expected you to drop the phone on her head with it recording! 😂 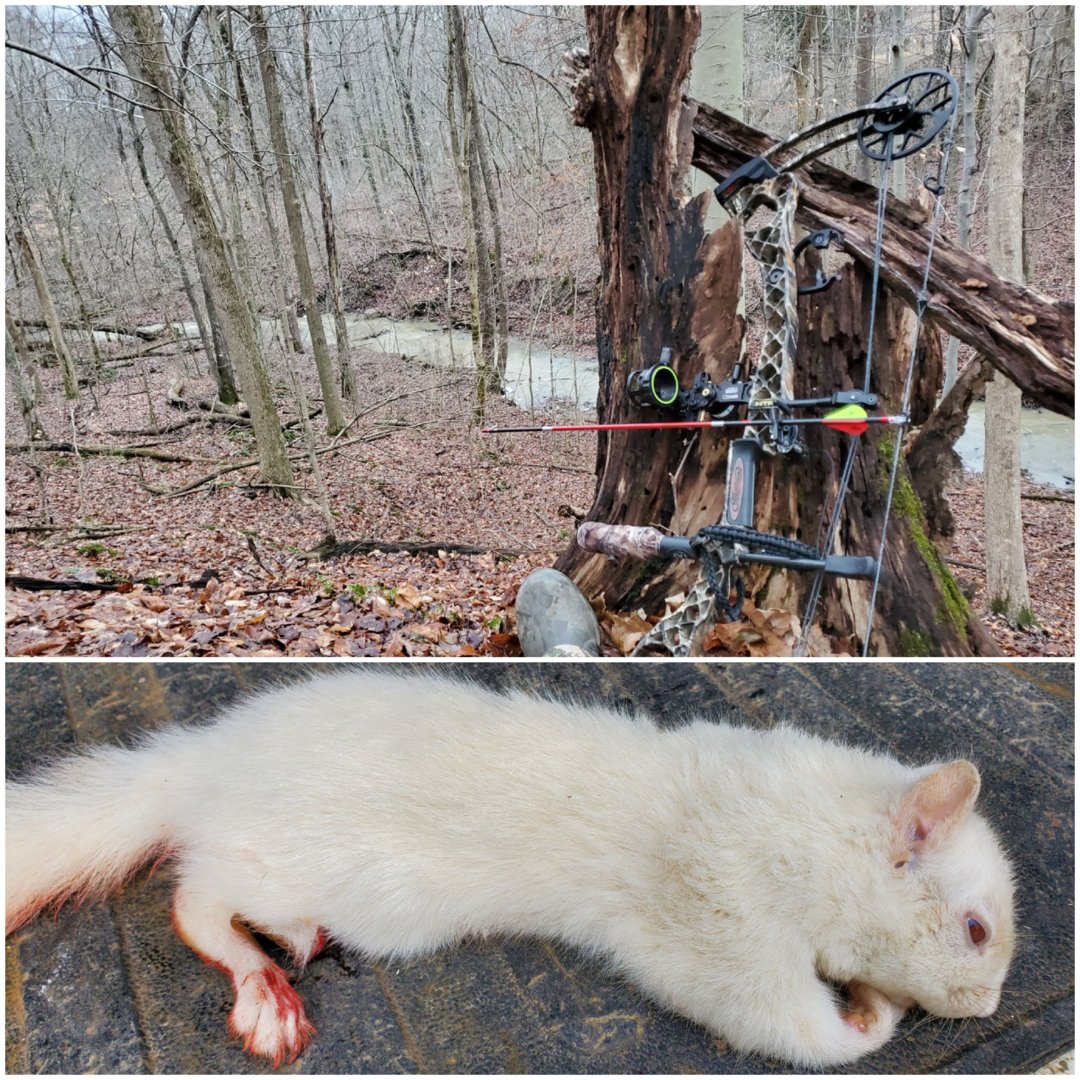 Arrowed my second Albino this morning.

Currently uploading the video of the 20 yard shot taken in some serious thick stuff. I had a very small window to make it happen.

No deer seen this morning, however I may get out later for a couple of hours.
Last edited: Jan 12, 2020
Likes: Isaacorps, Big_Holla, finelyshedded and 5 others

Very cool Denny! Just watched the videos with my 3yr old, he was all kinds of giddy lol.

How freaking high in a tree r u, 30' lmao?
Likes: finelyshedded and Wildlife

If it’s a mount better give him a quick wash to remove blood stain.