With both my kids filling their tags before gun week I was looking forward to maybe getting in a little hunting of my own. I found a good buck that was coming out quite regular on my neighbor. The deer are hitting the green grass due to there being zero acorns around this year. I hung a stand and was prepared to hit it all week of gun. Unfortunately I became extremely ill and never was able to hunt much. The Dr's finally figured out my problem and I'm on the mend and was looking forward to getting after this buck that I had been seeing.

Unfortunately Drew and I found one of his sheds yesterday afternoon while rabbit hunting. It wasn't there the day before because we had walked through there. It really sucks that he shed this soon but oh well...... 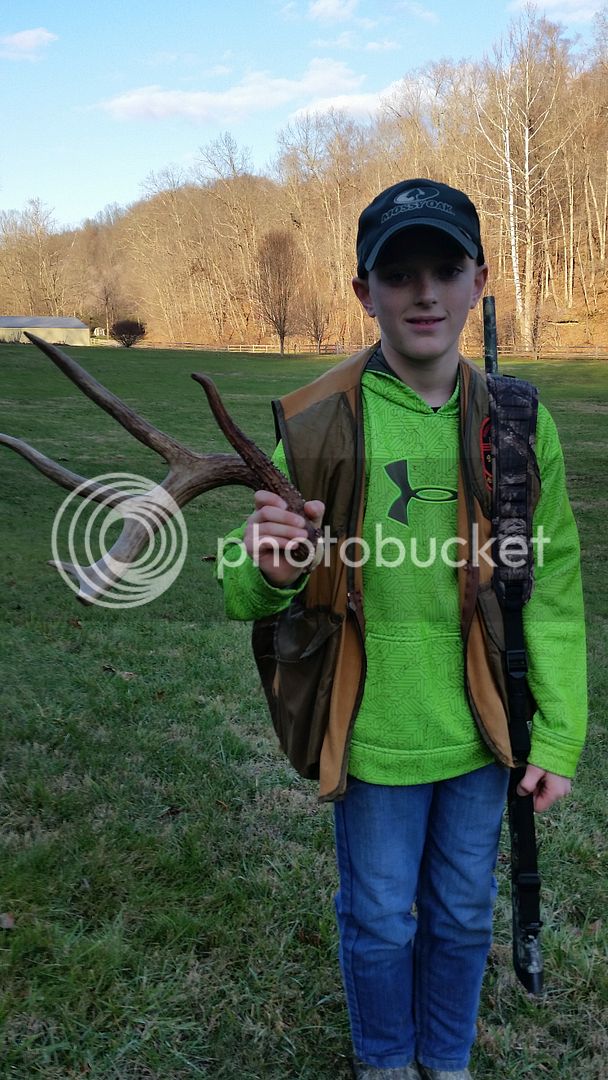 Damn he shed early. Glad to hear your getting better! You never know, another one might pop up that floats your boat.

Glad you're felling better, that sucks he shed but have talked to a couple guys that have seen bucks shed already.
Gonna be some bucks killed with no antlers the next gun season and muzzy season that guys think are does.
Hell the way the weather has been the deer are probably confused and think it's Spring.lol
Supposed to be 60 on xmas.wth

I would still give it a go if you have one half and shoot him with half........I would get him put back together....still the same buck!

I'll be damned! Another one dropping early.

xbowguy said:
I would still give it a go if you have one half and shoot him with half........I would get him put back together....still the same buck!
Click to expand...
That's what I was thinking as well.... Still time....

IMO, less does to breed and many have stopped breeding.

I have the same thoughts, poor nutrition, less does, etc. I seen this deer the Sunday eve before gun and he was with several does. The way November went and it being a trickle rut there is no doubt that he was still hitting does gun week. He must of blew a final load and his racked popped off, lol. We hunted this same deer until the final weekend last season and he carried both sides into March when I quit running cams. We looked everywhere for his rack thru turkey season but never found it. This year we literally trip over it in December in the wide open, lol. We have a good history going so hopefully one of the kids get to whack him next yr!

Stress is a large factor in shedding. The way the rut was strung out and far between....no wonder they're falling off. We're lucky they're still alive to shed.

Dang! That's a sweet antler! Congrats on finding it. The other one might drop soon?

Glad you are getting better health wise. Still a great find but a bummer he dropped so soon. Any chance he was injured?

Spencie said:
Glad you are getting better health wise. Still a great find but a bummer he dropped so soon. Any chance he was injured?
Click to expand...
I know he was fine and not injured Sunday eve before gun week. I don't believe an injury played a role in him shedding early.