As I mentioned in my 2020 bow kill I would do a write up on my wife's COVID buck. To give a back story on this buck. I have been wanting to plant soy beans for ever and every one kept talking me out of it since it would be in a one acre plot, they said “it will get destroyed in weeks”. Well me being me….challenge excepted. So after pounding 80 T post in the ground and running 4 strands of electric fence, walla aren’t no deer getting in here. I get the seed planted right before a big rain storm and about a week later the beans are up and looking good. At 2 weeks fertilizer on thinking to myself they can kiss my ass, I can grow beans! One day I go down to look at the plot and it has been destroyed…WTF. I start looking for deer tracks and there are none inside the fence. I pull the camera card to see what is going on a damn heard of ground hogs going in there. Game on you sonbitches. To keep it short I got 11 ground hogs out of the acre plot in a week. Knowing there is not much I can do other than over seed again and hope for the best. It did come out ok and for the most part it was up around 3 feet in Aug when I pulled the fence.

It only took a couple of days before the deer started to show up. There was one particular buck that my wife really like and said that’s the one she would like to hunt. We don’t name our bucks. So we watched this buck like clockwork through Aug and Early Sept and I put the jinx on her. My exact words were “you will be done the first day”. Wrong!!

The buck disappeared into thin air for 3 weeks and about mid Oct he showed back up on the corn pile at night. Mind you she still has not sat in her stand up to this point. I will never forget the day when the neighbor came over asking for permission to walk my creek because he hit a good buck in the shoulder. I asked him to give me a description of the deer, it sure sounded like him but I was not a 100 percent for certain. Only finding small amounts of blood and the shot I figured the deer would be ok. After not getting any pictures of this deer at all, I figured that he had died. She had a few other good bucks show up and she passed on them (must be that women’s intuition thing).

Fast forward a few weeks before Thanksgiving. We had just had puppies and had a family that would like to come look at them. After the visit we get a phone call a few days later saying they had tested positive for COVID!!! FML….. We didn’t give it much thought but boy let me tell you Thanksgiving weekend was bad for the both of us. Anyway I seen the forecast for opening day gun season was going to be nasty so I decided to put out a ground blind and at least be dry. I even took it a step further for her and had someone drop me off a buddie heater so now she would be warm and dry.

Monday morning comes and my wife is feeling pretty bad. I ask her if she wanted to go out and she said she that she would that afternoon. No biggie I will go and make sure everything is good in the blind and the buddy heater works. Around two I told her it was time to go and the look I got was you can go fugyourself. Well she finally gets dressed and we head out to the stand. I forgot to mention that she had a hard time breathing with the COVID, so I drive to a 100 yards of the blind. I thought she was going to pass out on the walk in and I started to feel pretty bad about dragging her out there.

We finally get set up and she’s to my right looking up a hill and I am checking the bottom and the next ridge up. Around 4 I get a tap on my arm “hey there is a buck up there rubbing a tree”. I think to myself all bullshit its gun season there is no buck making a rub right now. I could not see up that ridge due to a big pine tree in the way and she just kept telling me the same thing. About 10 mins went buy and the wind swirled and went right up the ride he was on. She looked at me and said he just flagged and took off. Well Shit! About 5 mins latter she’s tapping me again saying he’s back. Ok, I still have not seen this buck so it’s got to be a small guy that’s dumb as a box of rocks. She hits me harder he’s coming down the hill. I said ok get your gun ready and about that time I see him…WoW! That’s a good buck. He works a scrape and then turned towards us, and knew it as soon as I seen him. I told her that’s him! That’s the one you wanted.

So here we are in this little ass blind and now she can’t see him. I am trying to pull her over my way but the chairs are not letting that happen. I told her she had to get on her knees (every time I tell this story it gets derailed right there) she gets down and ready’s herself and BOOM. The buck drops in his tracks and I start getting all excited for her. Shit, Shit, SHIT he’s getting up shoot him again. “I can’t there’s a pine tree in the way”. Give it a second he’s going to stop BOOM, BOOM, he drops again. We celebrated in the blind for a few mins then went to recover him.

I have never hunted side by side with my wife, but I can tell you that it was one of my favorite hunts of all times and I am glad she was able to take the buck she wanted. On a side note, that was not the buck my neighbor shot, I have that buck on camera as of last week. 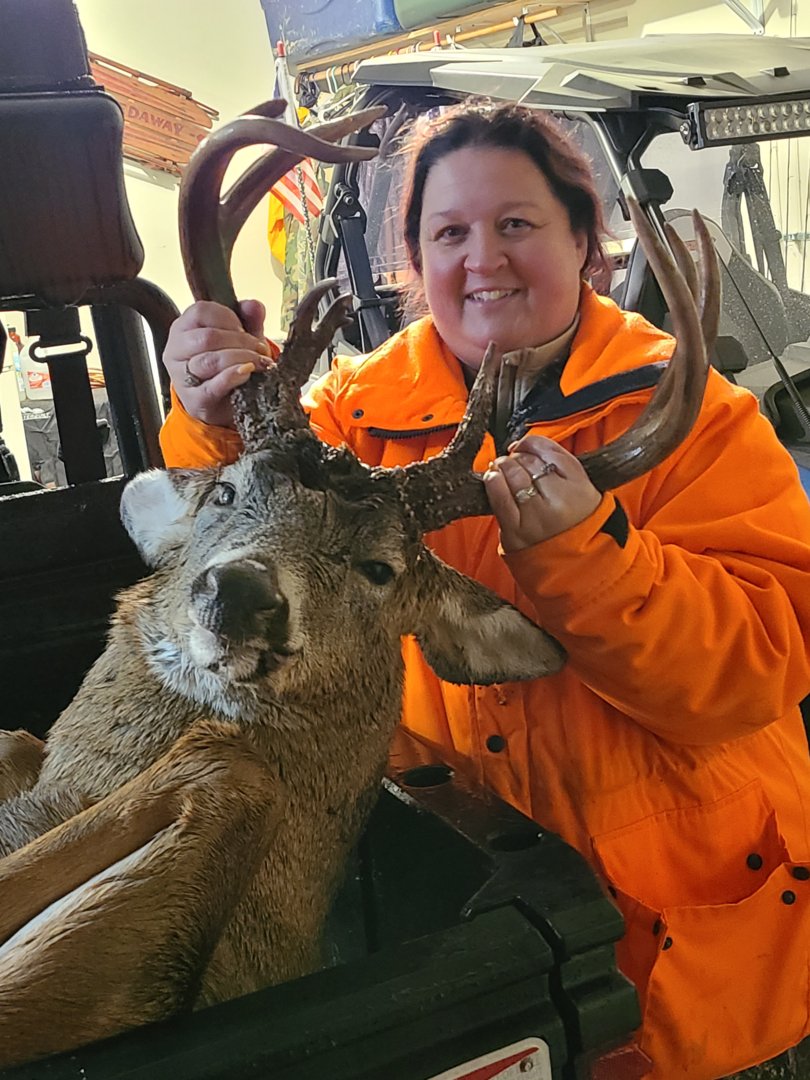 Awesome! Congratulations to her.

Hell of a buck!! Congrats to your wife and to you as well!! That Covid kicks your ass, glad she was motivated enough to get out there after him!!

BTW, was it the buck the neighbor shot?

Big Holla,
It was not the buck that we thought he shot. I don't know where he disappeared to for almost 2 months but glad he showed back up. I do have that buck on camera that he hit as of last week and other than a limp and a scar he is doing good. I will post some more pics latter on of her deer and the one that was hit.
Reactions: finelyshedded, giles and Big_Holla

Nice!!!! Congratulations too your wife. How’d y‘all handle the Covid?

Thanks guys. J COVID for me other than a few days with a fever was like a cold. The worst part for me was the loss of smell. For my wife it hit her hard, but was short lived. We found getting up a moving was the best thing for it
Reactions: Big_Holla, giles and "J"
S

Here's a few more pics of her buck. When I get a chance I will get a pic of the one my neighbor shot.

This was a couple of mins before she shot

Sauger said:
Thanks guys. J COVID for me other than a few days with a fever was like a cold. The worst part for me was the loss of smell. For my wife it hit her hard, but was short lived. We found getting up a moving was the best thing for it
Click to expand...

Good too hear, glad it wasn’t any worse than it was...

Congrats to you both! Nice mass on that deer too!

Dandy buck! Congrats to you both!
R